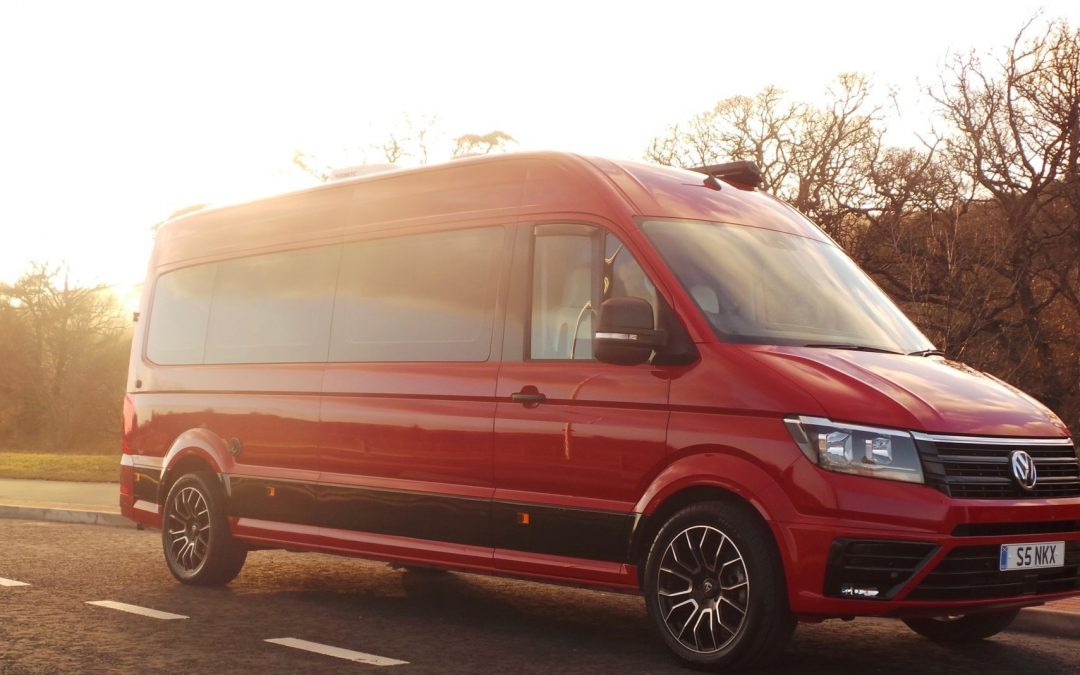 This article was originally published in VW Bus T4 & T5+ Magazineand is posted with their permission.

With a passion for VWs and a desire to travel a VW campervan was an easy choice for my wife, Nikki and I. No more hotels for us. Not anymore. We wanted to be out on the road, as travelling goes back generations in Nikki’s heritage.

Our first camper was a self-converted Volkswagen T5 SWB Sportline with a pop top. However, after three years of ownership and a 3600-mile round Europe trip in the summer of 2017, touring eight countries, it was decided that we needed a bigger camper. Our trusty T5 was becoming too small. Both Nikki and I suffer from medical ailments and in order to be more comfortable, we needed more space. Following our European tour, we decided to sell the T5. We advertised our camper for sale in August and no surprise to us, it sold the same day.

The new bigger camper simply had to be a VW and the newly released Crafter LWB platform made the perfect choice. A wee trip to our local dealer saw an order placed for a CR35 140 Highline LWB.  The van came with a few options such as the business pack to get A/C in the cab and twin captain chairs. The delivery was promised for the 10th October, however it arrived eleven days late. No pressure, but the new camper had to be finished for Hogmanay! With no time to spare, the day we got the van home the conversion started with the destruction of our new purchase. With only thirty-six miles on the clock, our friends thought we were mad.

Converting vans is nothing new to me, having previously worked with Highland Adventure Vans who are a local VW conversion company. The bulkhead was removed and the van cut open to install all the side windows, three Fiamma roof lights and the Dometic A/C unit.

The A/C is essential, as it had been 29°C at night inside the van during our last European trip. Up top a 150W Solar panel looks after the batteries and the Fiamma F65S awning provides some shade. Genuine VW side windows were installed, as there was no other supplier at the time. The van was then fully sound deadened including the whole cab area and insulated, which has resulted in a very warm, quiet van, with little or no road noise. Underneath the van is a seventy-litre fresh water tank and a thirty-litre LPG tank. To try and prevent future rust gremlins, I minimised the number of cut outs on the side of the van, the only one made is for the Truma combi boiler. The water tank filler point is installed just inside the back doors and the EHU located in the engine bay. 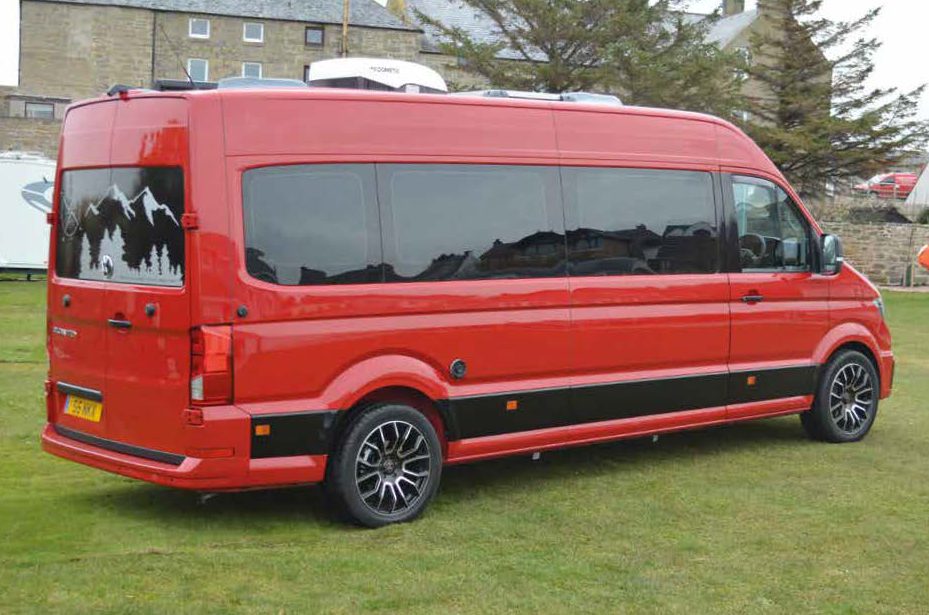 As this model of Crafter had just been released, I had no option other than a bespoke layout. My engineering background gave me insight, so I got the CAD drawings for the van from VW and designed the furniture layout and sliding bed system. To save a bit of build time I took a chance and fabricated the metal sliding bed, whilst waiting for the van to arrive. Thankfully the gamble paid off and the bed fitted nice and snug. The internal layout was then designed around the bed/seating area trying to make the living area feel as open and light as possible. The bed is magic and really comfortable measuring 6ft by 6’6” when made up for sleeping.

After all the cables were run in, by the construction of the toilet and shower room. This is positioned behind the driver’s seat, to make the space at the back of the van as open as possible.  Finally, no late-night dashes to the loo! Morland timber supplied the furniture board and the units were templated, then cut out of lightweight furniture board,

the panels were carpet lined as we felt this had a warmer feel. The bed system was installed first, followed before finally being assembled in the van. Eleven sheets of board were needed for the Crafter. A lot more than the usual three for a T5.

The Truma Combi 4E installed below the bed, provides loads of blown air heating as well as piping hot water. I can’t cook, so to help the wife out I installed a Spinflo Triplex oven, grill and hob. The Dometic sink was fitted on the opposite side of the van, to keep all the water feed and drainage pipes in one location. Food and beer are kept cold by a Dometic CRX80 fridge.

Winter camping in the Scottish Highlands can get pretty wet so, storage for jackets and equipment at the rear was created by installing a false bulkhead at the back of the van. A small tambour door allows internal access to the storage area, allowing for longer items to be carried. Wrap around overhead lockers providing masses of storage for longer trips away. The rear bulkhead also gave a nice surface to mount the 32” TV coupled with surround sound. There’s nothing better after a good day outside, than ending the day with a movie and a nice cold dram. 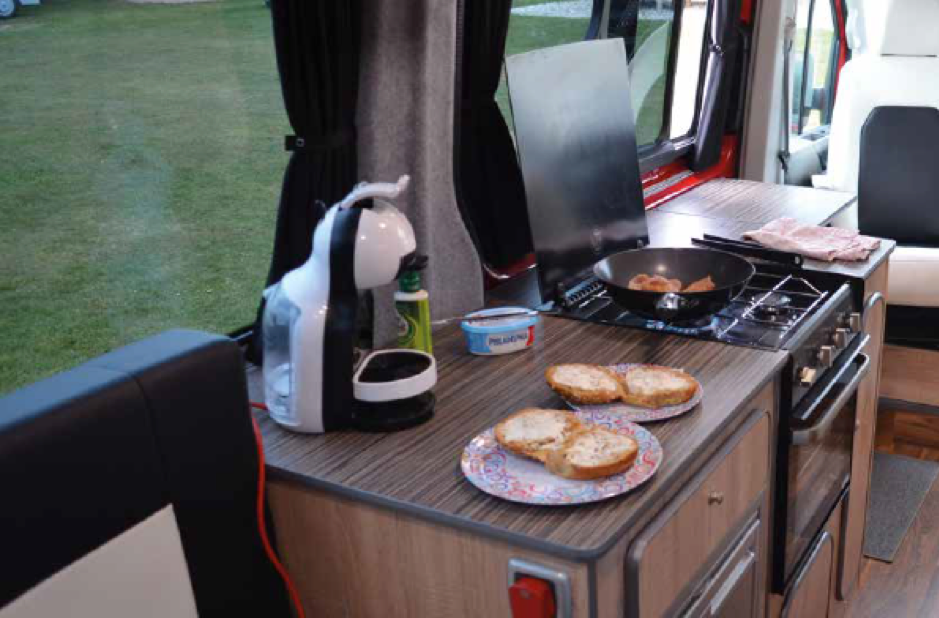 Visually we wanted the van to stand out so employed the services of a local company, Sean C Smith Auto Trim based in Newtonmore, to complete the two-tone leather trimming of the rear seats and re-trim the original front seats in leather to match. Externally the original steels wheels were changed for Wolfrace Eurosport Evoke20” alloy wheels. The suspension is still standard, but air suspension may be in the pipeline. Wheel choice for the new Crafter is a lot better than the old model, as it uses the same stud pattern as T5’s & T6’s. Another local friend, John Westwater at JW Autobody completed the two-tone colour coding with the front bumper following the VW Golf ‘R’ theme. Black gloss vinyl was then applied to the rear doors to mimic glass with graphics overlaid.

We enjoy wild camping so for going off grid, dual 125Ah leisure batteries were installed below the driver’s seat, these are kept charged by the solar panel. All the 12V & 240V electrics were installed in a void behind the driver’s seat with a tambour door for ease of access. I have to admit we recently got a 2Kva generator to help with wild camping, as the coffee machine

is a must! In the warmer weather being outside is key, so a BBQ gas point was installed on the back of the kitchen units, to allow for outside cooking under the awning.

Finally, after eight weeks of long cold nights and weekends working outside, our new camper was finished on 30th December with the help of Gavin a good friend. We spent 500 hours building the van. Hogmanay was celebrated in style on the West Coast of Scotland. Most weekends have seen us away camping since completing the van, including

a -12°C camp where everything working exactly as planned.

This build has driven home the fact that this is what I want to do full time. After loads of encouragement from family and friends a new conversion company called Roaming Homes Ltd has been established in Inverness. Hopefully this camper is a good demonstrator for future work!

Thinking of putting your own spin your van? Explore the entirety of the improved Wolfrace Eurosport range here and check if they are suitable for your vehicle with our handy fitment guide.